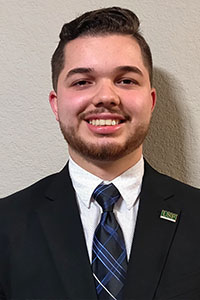 Ángel Yared Borrero Laureano was born and raised in San Sebastián, Puerto Rico. Due to the unincorporated territory’s economic and social crisis, he was obligated to seek a better future outside of his beloved 3,515 sq mi island after graduating from high school.

In 2017 Angel moved to Florida, unknowing of the disasters Hurricanes Irma and María would bring to his beloved Puerto Rico. Although these were both socially and personally traumatic, it allowed Ángel to understand the power that 5.7 million Puerto Ricans hold in the diaspora in educating the public in the United States about the struggles on the archipelago, due to its subordinate political and territorial relationship with the United States of America.

Ángel is currently a senior majoring in Mechanical Engineering at the University of South Florida in Tampa, FL. Upon completion of his bachelor’s degree, he wishes to pursue a professional career in the aviation or biomedical device industries. However, no matter how his career develops, the love for his home will always remain. Therefore, he would like to serve in a public leadership position in Puerto Rico to portray his passion for social inequality reforms and avid leadership skills. His ultimate career goal is to establish a non-profit organization that focuses on enhancing STEM careers from early ages in the public schools of Puerto Rico.

As a CHCI Intern, Ángel hopes to understand how the issues of Puerto Rico are addressed in Capitol Hill. He would also like to comprehend the complexity of Congress’ power over Puerto Rico.