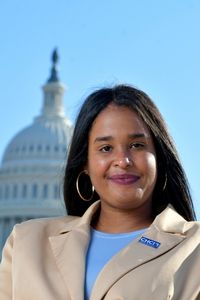 Darleny was born in the Dominican Republic and immigrated to the United States when she was four years old. Darleny was raised in The Bronx and identifies as an Afro-Latina. She is a first-generation college student. She has an Associate’s degree from the Borough of Manhattan Community College and is currently pursuing her Bachelor’s degree at The City College of New York. She majoring in Political Science and minoring in Latin American Studies.

Darleny has experience mentoring youth groups, leading voter-registration drives, and providing eligible immigrants with employment and naturalization services. Darleny currently works at #DegreesNYC, an organization that advocates for policy reform in the NYC education system. Darleny has had the opportunity to testify to the New York State Legislature on COVID’s impact on students and to the U.S. Higher Education and Workforce Subcommittee on doubling the Pell Grant. She is also a Youth Co-Chair for NYC Mayor-Elect Adam’s Education Transition Committee.

Darleny hopes to work in the State Department in the future as a policymaker focused on U.S. Foreign Policy in Latin America. As an immigrant from the countryside of the Dominican Republic, Darleny recognizes the resources and opportunities she has had access to in the United States. She believes that everyone should have access to social-emotional, academic, and career-based resources they need to thrive regardless of where they come from or where they live.

As a CHCI Intern, Darleny hopes to improve her advocacy skills and learn more about the federal policymaking process.