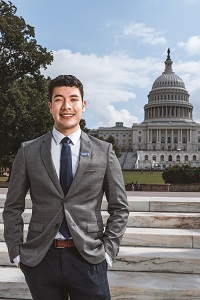 David was born and raised in Dallas, Texas, by his mother, who immigrated to the United States from Guatemala at the age of 17. Having grown up in a single-parent household and a culturally diverse community in North Dallas, David became passionate about understanding the complexities and hardships surrounding his community. As a first-generation student, David acknowledges and understands the importance of supporting others and giving back to his community. David’s commitment to these communities can be seen through his participation and acceptance in the AmeriCorps educational department supporting lower-income students in both charter and public schools in West Dallas.

David is currently a senior at the University of San Francisco Class of 2022, where he studies Politics with a concentration in law and justice while double minoring in Latinx-Chicanx Studies and Legal Studies. Upon completing his undergraduate degree, David hopes to obtain a Juris Doctor degree in Immigration Law to defend and advocate for undocumented individuals. It is David’s ultimate goal to challenge the Supreme Court in overturning the momentous decision of INS v. Delgado, which removes any constitutional rights for undocumented persons.

As a CHCI Intern, David hopes to better understand the legislative process, system, and the relationship that government bodies have with Latinx government and local leaders. Additionally, David desires to participate in conversations surrounding issues affecting the Latinx community and obtain the tools to further cultivate his professional goals.