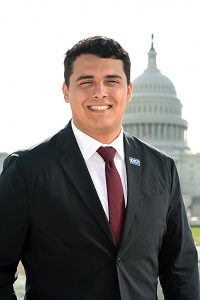 David was raised in Houston, Texas by his mother and father who both immigrated to United States from Mexico when they were 15 and 18, respectively. It was during the college application process that David realized how little he knew about the ins and outs of applying to top-tier universities. Thanks to the guidance of programs that help low-income/first generation student to apply to top tier universities, David realized the lack of information and guidance available for low-income/minority communities with respect to higher education. With access to these college resources, David held multiple workshops in his high school to aid his peers through the admission process. David is now a volunteer and President of an outreach group on campus that’s designed to sending volunteers to underserved communities in the surrounding New York area.

David is currently a junior at Columbia University majoring in Chemical Engineering with an academic focus on renewable energy and environmental pollution reduction. Upon completing his undergraduate degree, David wants to acquire his master’s in Environmental Engineering with an emphasis on improving and implementing environmental legislation while directly improving scientific advancements for pollution reduction. His career goal is to work with the Department of Energy on the betterment of environmental legislation at the state and federal levels, while increasing awareness for educational reform within his community.

As a CHCI intern, David hopes to increase his knowledge of the legislative process of green/renewable energy to better understand the policy behind the energy crisis. Eventually, David would hope to use this experience as a way to introduce more educational reform within public education in underserved communities throughout the nation.