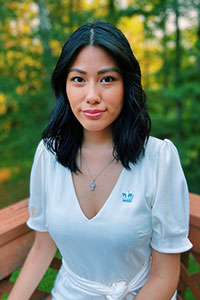 Patricia Granda Malaver was born in Lima, Peru and grew up in Atlanta, Georgia. Throughout her childhood, Patricia’s immigrant family emphasized the importance of education, community service, and perseverance to succeed. Despite the challenges of being a first-generation, low-income (FLI) student, Patricia used these values to go from being an English Student Learner in elementary school to the first Latina valedictorian of her high school. She received a full ride at Columbia University as a QuestBridge Finalist and Gates Millennium Scholar. Her inspiring story allowed her to be featured in the Atlanta Journal-Constitution and Remezcla, and she also won Mundo Hispánico’s “Outstanding Character of the Year” in the student category.

While at Columbia University, Patricia earned a Bachelor of Arts in Political Science and Human Rights. Outside the classroom, she was readily involved with the Latinx and FLI community, holding positions like treasurer of the Student Organization of Latinxs, co-chair of Latinx Heritage Month, and president of the Columbia QuestBridge Chapter. These roles motivated her to expand her advocacy work with student groups by becoming the Columbia College Student Body President. During her presidency, the issues of marginalized communities were always at the forefront of policy initiatives. Because of her hard work as a student leader, she graduated as a Senior Marshal, an honor bestowed upon outstanding members of the graduating class due to their achievements in academic and extracurricular activities. As a proud immigrant, Patricia is also committed to advocating for the expansion of justice and equity in her professional career. She gained extensive experience in the legal and political sphere when she was an intern for the Children’s Law Center, Brooklyn Defender Services, and the United States Attorney’s Office for the Southern District of New York.

As a CHCI Public Policy Fellow, Patricia will strive to further her understanding of the intersection of law, public policy, and community building. She also hopes to strengthen her advocacy skills to better aid the Latinx community, especially in her home state of Georgia. After the fellowship, she plans to attend law school to learn how to serve and advocate for those who are most vulnerable.