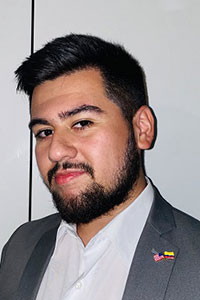 Juan Diego Mazuera Arias was born in Pereira, Risaralda, Colombia, and was raised in Charlotte, North Carolina. Son of immigrants who has sacrificed and devoted their lives to allow their children to obtain the American Dream. His family has taught him compassion, empathy, a strong work ethic, humility, resilience, education value, servant leadership, and a love for his Latinx heritage. While applying for college, he experienced the struggles associated with being an undocumented DACA recipient. After not qualifying for financial aid and paying an international rate for college applications, he decided to attend Central Piedmont Community College. In his first year, he received the Golden Door Scholarship and a full-ride scholarship at Queens University of Charlotte, where he became the first in his family to graduate from college.

During his time at the Queens University of Charlotte, he co-founded the Latinx-American Student Association, which provided more leadership opportunities for Latinx students on campus. He also served as Communications Director for the Hispanic-American Democrats of Mecklenburg County and worked on multiple political campaigns as a field organizer and campus organizer. Juan Diego hosted an immigration forum with Mecklenburg County sheriffs to discuss the dangers of an anti-immigrant policy 287(g) and brought renowned speakers to campuses such as Linda Sarsour, Dan McCready, and Cal Cunningham to spread awareness. In response to the zero-tolerance policy that led to family separation, he established the College Democrats at Queens University and recruited over 200 students.

As a Public Policy fellow, Juan Diego hopes to help Latinx small business owners prosper in the American economy. He is excited to build connections with other Latinx leaders and deepen his understanding of the legislative process both at a federal level and through D.C. think tank and non-profit organizations. Juan Diego wants to continue advancing his advocacy for immigration, education, business, and civic engagement policies for the undocumented and Latinx community.