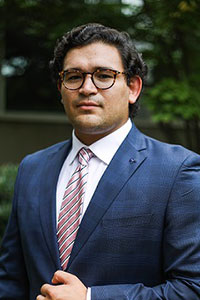 Ian M. Haimowitz was born and raised in Taos, New Mexico. He is the son of an indigenous Nicaraguan immigrant mother and a Jewish-American father. After his mother passed at an early age, his father substantially raised him in a Native American community called Taos Pueblo. Growing up with mixed cultures taught him the importance of social responsibility, aiding those in need, and working towards a better future for all.

As a graduate of The George Washington University, Ian majored in International Affairs with a concentration in International Politics within the Elliott School of International Affairs with a minor in Public Policy in the Columbian College of Arts & Sciences. He was selected to participate in the inaugural cohort of Cisneros Scholars within the Cisneros Hispanic Leadership Institute; during which, Ian became the Vice-President of GW NAACP, the Senate Chief of Staff of the Student Association (SA), and an Associate Justice of the Student Court within the SA. Ian also worked as a National Security intern at the Federal Communications Commission, which focuses on securing the nation from malicious actors. He also interned at the Insider Threat Program in the Department of Energy, the Democratic Congressional Campaign Committee, the Fulbright Association, and the National Council on US-Arab Relations. Ian has also contributed to programs under the Working on Wellness Grant to aid the National Indian Youth Leadership Project.

As a CHCI-Amazon Public Policy Fellow, Ian looks forward to exploring the changing nature of technology, its national security application, and its impact on the Latinx and minority communities. He is excited to engage with fellow professionals: building the nation of tomorrow, today.