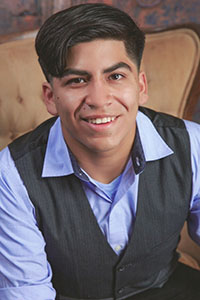 Gonzalo was born in Watsonville, California where his family immigrated to after arriving in the United States. He has lived in Bakersfield, California for the latter half of his life where he has been an active member of his community. Going from living in California’s Central Coast to the Central Valley has shaped his character. Coming from two contrasting communities, he has seen the disparities that persist between urban and rural communities. As the son of working-class parents, Gonzalo understands the importance of pursuing higher education and inspiring others to do the same. He has worked on campus as an academic peer tutor, helping other students achieve their educational goals.

As a CHCI participant, Gonzalo hopes to enhance his leadership skills and improve his knowledge of public affairs. He hopes to be able to use this experience to make a difference in his community and inspire others to do the same.