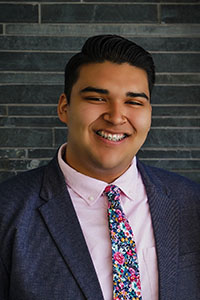 Hector Bustos is a first-generation college student from Santa Ana, California. Bustos takes pride in his identity as a gay Latinx student at the University of San Francisco. Bustos was raised in a single-parent household his entire life. He is incredibly grateful for the sacrifices his mother made to ensure he could attend a four-year university, like USF. As a third-year politics student, his passion for civic engagement and advocacy has grown since arriving at USF. Bustos most recently served as the Student Body President for his university and has taken an active role in speaking up on issues of race, income inequality, and immigration.

Having lived and experienced financial hardships his entire life, he hopes to be an advocate for his community. Bustos is proud to say he is from the city of Santa Ana, but much like any other city, it is far from perfect. After being evacuated from his dorm room in March, Bustos has spent most of his time in self-isolation engaging with youth-led organizations across Santa Ana, as they build the platform to change the course of action of the city. He has also taken advantage of his time by playing working with the Democratic Party of Orange County as a Field Organizing Intern.

As a CHCI Intern, Bustos hopes to build lifelong connections with his cohort and gain the experience necessary to continue to advocate for issues that affect the Latinx community.