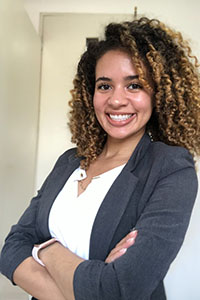 Valerrie was raised in a military family living in multiple places throughout the United States and abroad, until settling down at the age of 9 in the small town of Fallbrook, California. Therefore, Valerrie was raised by her mom and lived with her Grandmother, who immigrated from México. As a multi-racial first-generation college student, Valerrie understands the importance of higher education for minority women and strives to use her degrees to advocate for human rights.

Valerrie is a student at San Francisco State University, pursuing degrees in International Relations and Criminal Justice. On-campus she is involved with her sorority Alpha Gamma Delta having held two officer positions, Panhellenic Council, and chosen as a leader for the 2019 Israel and Palestine Perspectives tour. With a passion for travel, Valerrie studied abroad in Japan, further pursuing her Japanese language skills. Off-campus, Valerrie has interned at the San Francisco office for Senator Dianne Feinstein. This past Spring, she interned as a refugee advocate at Nile Sisters Development Initiative, a non-profit that seeks to help refugee and immigrant women and their families transition easier into the United States.

After completing her undergraduate degrees, Valerrie hopes to pursue a law degree and a Master’s degree in International Relations.

As a CHCI Intern, Valerrie is committed to learning everything she can about the legislative process and international relations. She hopes to utilize her new skills to empower others and create effective change in her community.