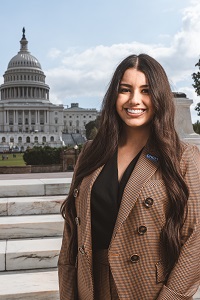 Ilse was born in Delicias, Chihuahua and immigrated to Glendale, Arizona with her parents at the age of three. Understanding the sacrifice her parents took in bringing her to the United States, Ilse is a first-generation student in Barrett, The Honors College at Arizona State University, where she is pursuing bachelor’s degrees in Political Science and Religious Studies with a concentration in Politics and Global Affairs.

Her passion for immigrant rights led her to the world of politics, where she has been introduced to other issues of interest such as voting rights, education, and economic inequality.

Ilse has experience in state and federal campaigns, most notably spending a year with the Mark Kelly for Senate campaign as a finance intern. She has previously interned in Rep. Ruben Gallego’s Washington, D.C. office. Also, she participated in the Arizona Senate Page Program where she was appointed to be the Senate Bill Reader for the 55th Legislature and has also worked in party headquarters. Ilse hopes to utilize her political experience to create meaningful reform that protects our country’s most vulnerable communities.

As a CHCI Intern, Ilse hopes to build on her knowledge of working in a congressional office, as well as gain insight on her issues of interest. With the vast resources and network that CHCI offers, Ilse hopes to develop the skills and connections necessary to learn how to draft public policy that protects the immigrant community and serve in public office.