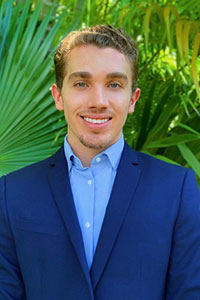 Ivan Robles was born and raised in the diverse city of Miami Beach, Florida. His upbringing influenced him to commit to ensuring communities can shape the public policies that affect their lives. His goal is to help make the vertical relationship between communities and political leadership more horizontal, particularly when preparing for and responding to crises and disasters.

In the summer of 2019, Ivan traveled to Puerto Rico, his family’s place of origin, to learn how residents responded to the ongoing damages and trauma caused by Hurricane Maria. He spoke to local activists, government employees, nonprofit leaders, educators, and healthcare specialists to fully understand Puerto Rico’s disaster response. Ivan learned that residents had established robust support networks and diverse coalitions to guarantee survival and promote healing in the wake of tragedy. These networks emerged due to a disorganized and insufficient response from the island’s territorial and federal governments. Following a year of research, Ivan featured these stories in his Duke University undergraduate honors thesis, “Disaster Futures: Puerto Rico’s Encounter with Hurricane Maria,” exploring how islanders and diaspora Puerto Ricans have worked to move beyond recovery towards a more stable and self-determined future.

As a fellow with CHCI, Ivan hopes to continue his work and better understand the government’s crisis and disaster planning strategies. He is especially interested in exploring how these strategies can more actively better serve marginalized communities, such as people who experience poverty, the LGBTQ+ community, and people of color.