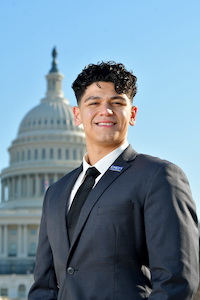 Jeffrey Perez was born and raised in San Bernardino, California by his mother who migrated from Guadalajara, Jalisco at the age of 17. He is a first-generation college student currently pursuing a degree in Political Science with a Pre-Law track at Oklahoma State University.

As a first-generation Mexican-American in his family, he has seen firsthand the faults in our education, judicial, and immigration system. Therefore, this influenced him to become involved in several organizations on campus. Some being, the President of the National Association for the Advancement of Colored People and Voto Latino. During his time with these organizations, he advocated for voting rights in minority communities and educated underrepresented populations on current issues in our electorate. This brought him to become a Pre-Law Schools Admissions Council Scholar with The Cecil C. Humphreys School of Law at the University of Memphis. During the program, Jeffrey gained various skills such as legal research and advocacy in the legal field. Upon graduation, Jeffrey plans to attend law school in hopes of becoming an immigration attorney to help ease the excruciating immigration process.

As a CHCI Intern, Jeffrey hopes to gain knowledge on the ins and outs of Capitol Hill, as well as to gain insight into the legislative process. He hopes to set an example for young Latinx youth to be civically engaged and set the example for the next generation of leaders.