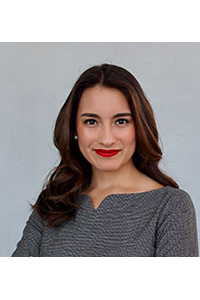 Lilián Sánchez grew up in Des Moines, Iowa as the proud daughter of a strong immigrant single mother. From a young age, Lilián witnessed first-hand the challenges her mother faced in fleeing an abusive household and raising two young children in a new country. Despite these challenges, Lilián became the first person in her family to attend and graduate college where she acquired a new language that paired her family and community’s daily struggles with the language of social justice.

Lilián graduated from the University of Iowa with degrees in Political Science and Ethics & Public Policy. There, she developed an impressive leadership record and was elected the first Latina to serve as Student Body Vice President. She was awarded the Hancher-Finkbine Medallion, the University’s premier leadership award, and would later be inducted into the Iowa Latino Hall of Fame as the recipient of the Iowa Latinx Youth Leadership Award. Upon graduation, Lilián was named Amnesty International’s Ladis Kristof Fellow where she embarked on a ten-week fellowship in Oakland, California to develop a national youth strategy and promote local and state advocacy efforts relating to criminal justice reform, LGBTQ+ rights, and immigrant and refugee rights. Subsequently, Lilián joined then Senator Kamala Harris’ office in Washington D.C. for an introduction into the federal legislative process. After her internship, Lilián returned to her home state to serve in the Office of the Iowa Auditor of State and then later joined Senator Harris’ Presidential campaign as her Iowa Deputy Political Director.

As a CHCI Public Policy Fellow, Lilián hopes to continue to cultivate her understanding of the intersection between justice, law, and public policy. She plans to pursue a legal career to help expand on the work of the human and civil rights movement. Inspired by her own experience as an immigrant, she hopes to advocate for the basic rights of underserved and historically oppressed communities across the United States.