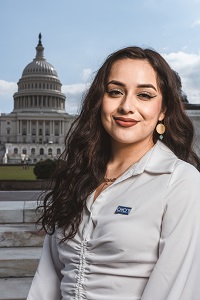 Lizbeth was born in Sinaloa, Mexico, along with her two older brothers and parents. At the age of 3, her family immigrated to the United States to seek better opportunities, and they have been living in California for the past 19 years. As a low-income student, Lizbeth has learned to overcome the challenges of studying at a large, public university. She has found her voice as a student leader of her university, where she served as a senator representing and advocating for undocumented students. Conscious of the difficulties that arise when adjusting as a first-generation student, Lizbeth has also served as an ambassador for Let’s Go to College CA, a virtual hub that spreads resources to college students in California. During her freshman year, Lizbeth volunteered for an immigration attorney and found a passion for public service through legal assistance.

In June 2021, Lizbeth earned a Bachelor of Arts in English with a minor in Political Science from the University of California, Riverside. She plans to take a gap year before applying for law school to pursue a career as a criminal defense and immigration attorney. Her goal is to use her privilege as an educated individual to advocate for her community in court.

As a CHCI Intern, Lizbeth hopes to expand her knowledge about the legislative process while working on initiatives that target inequality and immigration reform. She hopes this experience will allow her to continue advocating for her community in political spaces.