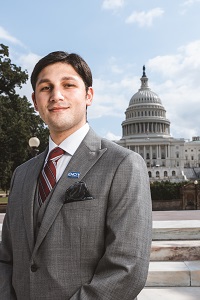 Born in Miami, Florida, Lorenzo was raised in Fort Lauderdale, Florida, the only child to a single mother, and an immigrant from Cuba. A first-generation Cuban-American, Lorenzo was imparted with the importance of education, a strong work ethic, and the necessity of aiding those in need. Lorenzo both attended university and worked at Allied Universal Security full-time throughout his undergraduate curriculum to support his endeavors of tertiary education.

Lorenzo’s diligence and perseverance paid off when he was the first member of his family to earn a 4-year degree; a B.A. in Political Science from Florida Atlantic University (FAU) in Spring 2021. Lorenzo headed FAU’s Cambodian delegation to the National Model United Nations, where the delegation received an outstanding delegation award, and FAU placed 1st overall, and Lorenzo’s delegation received the outstanding delegation award. Through this program, Lorenzo gained an understanding of diplomatic skills in areas such as speech writing, public speaking, negotiation, dispute resolution, and research. Beginning in August 2021 Lorenzo will be a graduate student at American University pursuing an M.A. in Public Policy, with a concentration in Advanced Policy Analysis. Following graduate school, Lorenzo hopes to attend Harvard Law to pursue a career in labor law, labor advocacy, and public service.

As a CHCI Intern, Lorenzo hopes to become intimately familiar with policy-making procedures and development, particularly labor, to combat issues such as a lack of federal policy regarding job security, establishing protection from unjust discharge, and develop the skills necessary to argue for worker’s rights nationally.