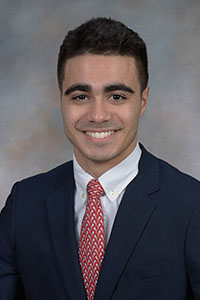 Nicholas was born and raised in the neighborhood of Sunnyside, New York by his parents who immigrated to the United States from Chile. Traversing socioeconomic realities every day on his train ride to school instilled in Nicholas a deep interest in politics and public policy. On-campus, he has worked as a representative for a Democratic presidential campaign and has interned at MSNBC and the US State Department.

Nicholas is currently a junior at Columbia University majoring in Political Science with an emphasis on American government. He is also seeking a concentration in history. For his work, Nicholas has been inducted into the Pi Sigma Alpha Honor Society for Political Science. Upon completing his undergraduate degree, Nicholas hopes to obtain a master’s degree in political science with an emphasis on international relations. His ultimate career goal would be to serve and represent his community as a member of Congress.

As a CHCI participant, Nicholas hopes to familiarize himself with the process through which policy is shaped by congressional norms and institutions. He also seeks to better understand how Congress interacts with the federal bureaucracy, the presidency, and outside interest groups. Nicholas hopes to be able to use this knowledge to serve as an effective advocate for his community and the issues he cares about.