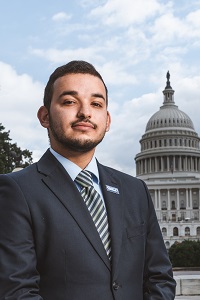 Raymond was born and raised in the small town of Ceiba in the Commonwealth of Puerto Rico by his mother, father, and older sister. His childhood was a normal childhood but from a young age he suffered bullying. Since then, Raymond has always felt like he should speak for others who are being oppressed. He used those experiences to run and be involved in student government since the third grade, being class president, up until graduating high school. In college, he is actively involved in student affairs and is currently serving as Vice President of his university’s Student Council.

Raymond is currently in his fourth year of college in the Inter-American University of Puerto Rico, Fajardo Campus majoring in Microbiology with a minor concentration in Investigative Law and Human Rights. Upon completing his undergraduate degree, Raymond plans to obtain a master’s degree in Government and Public Policy, another master’s degree in Constitutional and Human Rights Law, and then a Juris Doctor (J.D.). His goal is to work to represent civil and human rights, as well as constitutional conflicts for the minority population and middle-class citizens of the United States and of Puerto Rico as the first Puerto Rican to be elected to the U.S. Senate.

As a CHCI Intern, Raymond hopes to strengthen his knowledge of the legislative process, as well to gain new insight on new and/or pressing issues tackling minority population, such as comprehensive healthcare reforms, the current situation at the U.S.-Mexico border, civil and human rights issues, voting rights and criminal justice reform. He hopes that with this experience, he can help others in the future and keep fighting for the abused and neglected citizens of this country and to bring the voice of millions who are currently not being fully represented in Congress.