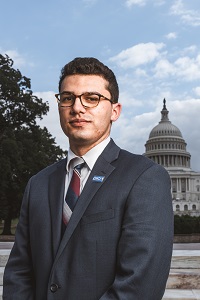 Tarcisio is a proud immigrant from Guadalajara, Jalisco, Mexico, coming to the United States with his family at a young age. He has since called Indianapolis, Indiana his home. Tarcisio is a recent graduate from Indiana University – Purdue University Indianapolis (IUPUI) where he majored in Neuroscience and minored in Chemistry and Medical Humanities & Health Studies. He is an aspiring physician activist hoping to serve Hispanic and other underserved communities.

During his first two years of college, Tarcisio worked as a server in a family-owned Mexican restaurant where he rediscovered his roots and native culture. Wanting his Latinx peers to feel a similar sense of belonging, he facilitated weekly programming to 30 Latinx first-year students, ultimately helping to increase the cohort’s retention rate to 94% and establish an alumni association. Tarcisio also worked as an undergraduate researcher and as an instructor in Chemistry and Biology. Outside of school, Tarcisio devoted his time as a Spanish medical interpreter, hospice patient visitor, and food pantry volunteer and worked as a patient care technician.

Tarcisio has been involved in legislative efforts to provide driver’s license cards to the 100,000+ undocumented residents in Indiana and has mentored undocumented youth in his community. Upon graduation, Tarcisio was recognized as an IUPUI Top 100 Scholar out of 21,000+ undergraduates based on his academic excellence, campus leadership, and community engagement.

As a CHCI Intern, Tarcisio hopes to better understand policy and policymaking to be able to better advocate for legislative changes in his home state of Indiana.