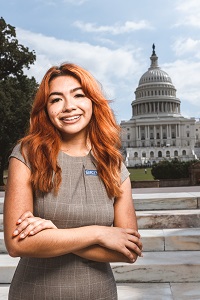 Yamilet was born in Raleigh, North Carolina. She would later be adopted at the age of 8 by a loving family. When she was adopted, Yamilet started to go by the name “Jem”, and prefers that nickname to this day. She would be raised in a nearby town called Cary, an upper-middle class suburban area. This culture shock made her childhood very difficult to maneuver and left her feeling disconnected from her roots. When she finally reached high school, she was able to expand her views and outlook on life. This is where her love for research and politics began.

Yamilet was accepted to the University of North Carolina at Wilmington. She is majoring in Political Science and Economics with a minor in International Affairs. Yamilet knows she is the sole provider for her college experience so she has kept a job throughout college. She also loves to be involved on campus. Yamilet was elected as a senator for the Student Government Association and won the Junior Class President election. For her senior year, she was awarded the opportunity to be an Academic Honor Board member and Vice President of her co-ed Latino fraternity, Alpha Psi Lambda. Following graduation, she hopes to attend graduate school in D.C. and pursue becoming a professor.

As a CHCI Intern, Yamilet feels it is necessary to commemorate the many lessons and perspectives she encounters. She hopes this opportunity grants her the ability to become a more well-rounded researcher and critical thinker.