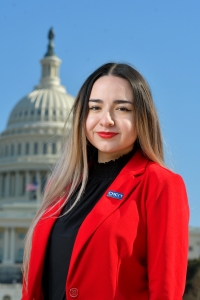 Alejandra Leija (she/her) grew up in a small community called Parlier. It is located in the Central Valley of California. As an elementary school student, she became passionate about mathematics but saw few opportunities that allowed her to apply it to the world. In middle school, she was exposed to engineering through outreach programs. Because of that, she instantly knew that she wanted to become an engineer one day. The lack of representation in the field was the reason it took many years for her to know about such an opportunity. She became determined to be part of that 2% of Latinas with STEM degrees.

Alejandra majored in mechanical engineering at the California State University, Fresno. There she thrived in academics, leadership, and extracurricular activities. She instantly became involved in research with a professor focusing on biomedical devices and organizations like the Society of Women Engineers (SWE) and the Society of Hispanic Professional Engineers (SHPE). This involvement assisted in landing internship positions at General Electric Aviation and Lawrence Engineering Group during the summers. Alejandra was able to take on leadership positions, participate in K-12 STEM events in the community, and form significant connections throughout her undergraduate experience. At the end of her undergraduate journey, she was awarded the Lyles College of Engineering Dean’s Medalist because of her ability to balance her academic achievements as well as contributing to positive change in her college by being an advocate in engineering organizations.

As a CHCI-Shell Public Policy Fellow, she plans to learn more about the policy-making process and hopes to correlate it with STEM-related issues including creating STEM opportunities and educational programs in underrepresented communities and climate change impacts.