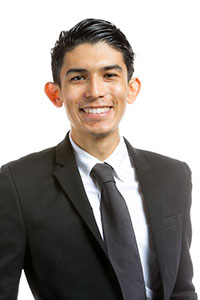 Octavio Zarraga is a Mexican-American who was born and raised in Garland, Texas. He graduated from The University of Texas at Dallas in 2018, with degrees in Biology and Neuroscience with a minor in Public Health. Octavio is an aspiring physician who is eager to serve Latinos and other underserved communities.

Throughout his undergraduate education, Octavio spent his time volunteering with the Galerstein Gender Center as a member of the LEAP Initiative committee. In that role, he collaborated with other students to promote sexual and gender equity on campus. At the same time, Octavio worked as a medical scribe where he served as an assistant to a number of physicians at a local emergency room in White Rock Lake. During his time as a scribe, he noticed a lack of representation among healthcare providers, especially queer people of color, and how this impacted quality of care to patients who identified as LGBT+. Noticing this present disparity in healthcare, Octavio began to volunteer at the Nelson-Tebedo Clinic, Resource Center, where he helped to increase educational awareness about sexual health. He went on to be employed as the Spanish PrEP Navigator and Testing Community Outreach Coordinator. In that role, he worked to increase access to HIV/STI testing and PrEP – an HIV prevention medication. From those influential experiences, Octavio moved on to work with the Center for Health Empowerment to start one of the first same-day PrEP clinics in South Dallas. Octavio also collaborated with the School of Health Professions at UT Southwestern as a Youth Intervention Specialist providing HIV/STI education to young Black and Latino men. Octavio understands the importance of minority representation in healthcare, and expects to advance the efforts in bridging this gap.

As a CHCI Public Policy Fellow, Octavio looks forward to expanding his knowledge and professional experience with healthcare policy and law. Octavio will advocate for the development of policies that promote health equity for underserved communities.