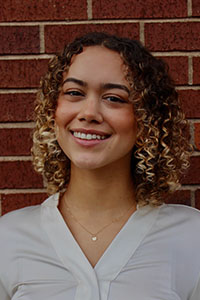 Allison Domínguez was born and raised in Eugene, Oregon by her parents Ellie and José. Her father immigrated to the United States from the Dominican Republic after deciding to pursue higher education. Her parents met at the University of Oregon where Allison is now a student. From a young age, her family instilled in her the importance of education and public service. Ever since she can remember, she has been committed to bettering her community.

At the University of Oregon, Allison is currently a junior pursuing her bachelor’s degree in Political Science as well as Public Relations. She is minoring in Legal Studies. On-campus, she has worked as an election commissioner for UO’s student government, where she ensured fair and accessible student elections. In 2020, the Dean of Students awarded her the Centurion Award which recognized her commitment to leadership and service to the community. She is also a Wayne Morse Scholar. In the future, Allison hopes to run for a position in her local government or work for a nonprofit like the Equal Justice Initiative which focuses on changing the criminal justice system for the better.

As a CHCI Intern, Allison hopes to strengthen her skills in legislative research and learn more about writing policy. She also looks forward to meeting the other interns from her cohort who are coming together virtually from all over the country.