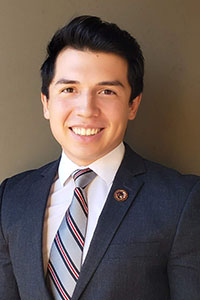 Gustavo De La Fuente was born and raised in the small rural town of San Benito, TX. He grew up under the guidance of his mother, Maria, who became his biggest inspiration from the struggles she faced as a single mother who emigrated from Mexico.

He is currently a student at Texas A&M University, San Antonio, majoring in Psychology and minoring in Criminology. During his tenure at Texas A&M University, San Antonio, Gustavo has worked as a Student Assistant for University President, Dr. Cynthia Teniente-Matson, served as Speaker of the Senate for his Student Government Association and is currently a CDT 1st Sergeant within the UTSA’s ROTC Roadrunner Battalion.

He notably also served as a HACU ¡Adelanté! Leader-In-Residence Scholar, for which he assisted students in obtaining scholarship and internship opportunities; every year only 90 students around the country are selected to participate in this prodigious program. For his exemplary work as a HACU campus ambassador, he was awarded the Jose Ruano Leadership Award for which only 3 students were selected from his national 90 student cohort. In the future, he hopes to earn J.D., work as an intelligence unit officer for the U.S. Army, and work for the U.S. Department of Justice or U.S. Congress.

As a CHCI Intern, Gustavo hopes to assist constituents in addressing federal issues and learn more about criminal justice reform. He hopes to inspire other fellow Latinx students to pursue their ambitions and create more equitable opportunities for the Latin community.