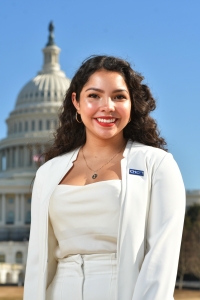 Andrea Daniela Jimenez Flores (She/Her) was five months old when she and her parents immigrated from Mexico to the United States. Her parents’ strength, resilience, and immense support made it possible for her to become the first in her family to graduate college while overcoming obstacles presented by her immigration status. Growing up as an undocumented Latina in West Valley City, Utah, enabled Andrea to see that her community was overlooked and underrepresented. The realities of her experiences with her two intertwined identities gave her a passion for social justice and a need to do everything she could to create an equitable society for underserved communities through public service.

Andrea graduated summa cum laude from the University of Utah with three Bachelor’s degrees in Communication, Political Science, and Sociology. Whilst in college, she made it her mission to advocate for Latinx and immigrant populations. She became a Dream Ambassador and Student Director of the Road Home’s Book Club to emphasize the importance of education for underserved communities. Andrea interned for Utah State Senator Luz Escamilla and the Ibarra Strategy Group, where she was further exposed to the challenges faced by her community at the state and national levels and the lack of representation within government. She held many roles at Comunidades Unidas, focusing on advancing immigrants’ rights, Latinx empowerment, workers’ rights, civic engagement, and eliminating barriers placed on immigrant communities.

As the CHCI-Facebook Public Policy Fellow, Andrea hopes to gain experience in the legislative process to advocate for immigrants’ rights. She aims to gain a greater understanding of the impacts of immigration status on policy and the involvement of grassroots efforts in the policymaking process. Andrea hopes to use her experience as an undocumented person of color to pursue a public interest legal career to advocate for historically disadvantaged communities.