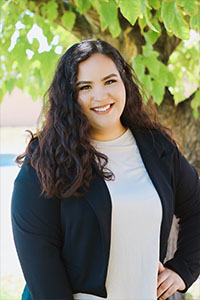 Citlaly Gomez Ibarra is a first-generation American raised in Phoenix, Arizona by her parents who migrated to the United States from Caborca, Sonora, Mexico.

Citlaly is currently a junior attending Arizona State University studying Political Science and History, with a minor in Transborder Studies. On-campus, Citlaly has participated as a member of the Hispanic Business Student Association and served a role as an executive board member for Pi Lambda Chi Latina Sorority, Incorporated.

Off-campus, Citlaly has been involved in the nonprofit sector and has had the opportunity to intern with A New Leaf and Aliento. Her interest in local government and community enrichment led Citlaly to intern at the Arizona House of Representatives and in Arizona’s 7th congressional district. Citlaly’s roles in constituent services and community outreach have strengthened her desire to gain more insight into public policy. Most recently, Citlaly held a role as a community services liaison with Poder In Action which is a grassroots organization that focuses on leadership development, systems change, and moving local public policy.

Upon completion of her undergraduate degree, Citlaly plans to get her Master’s in Public Administration. Ultimately, Citlaly will be attending law school and will pursue a career to serve alongside the migrant and Latinx community.

As a CHCI Intern, Citlaly aims to build a foundation of understanding public policy, the legislative process, and how we can create a positive impact by encouraging civic engagement in our communities.