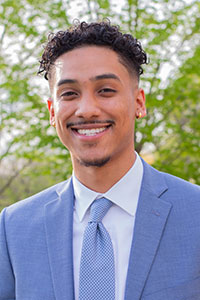 Daniel Jones (he/him) is the son of Salvadoran and Dominican immigrants and a first-generation US-born citizen. He grew up in the Washington, DC, area, where he was exposed to a variety of cultures and experiences that showed him the importance of diversity and community. Having parents involved in advocacy work for the Latino community while growing up helped guide him to work for the advancement and support of Latinos and minority groups with a focus in STEM and education.

Daniel graduated from Bridgewater College with a degree in Biology and a minor in Spanish. During his time at Bridgewater, he was a Dean’s List student, a Resident Advisor, Student Senator, mentor to first-year students, and more. His senior year, he received the Promega Diversification of Our Research Scientists (D.O.O.R.S.) Scholarship to support independent research pursuits. Since his freshman year, Daniel has been involved in various research endeavors. He worked with Associate Professor of Biology Dr. Moshe Khurgel to analyze environmental variables that impact axolotl salamanders, followed by a project to isolate and identify viruses associated with a specific bacterium. Most recently, he completed an independent research project under the guidance of Harry G.M. Jopson Professor of Biology Dr. Stephen Baron, where he cloned a gene for an enzyme, introduced it into the genome of a different organism, and sought to mass-produce and characterize the protein. Daniel has worked with the Children’s Defense Fund’s Freedom Schools literacy education program as a Servant Leader Intern and recently completed an internship with the NewBridges Immigrant Resource Center to create and translate media to provide information and resources to the Latino community concerning the 2020 Presidential Election.

As a CHCI-ConocoPhillips Public Policy Fellow, Daniel hopes to learn about public policy and how to use government resources to mobilize the community.