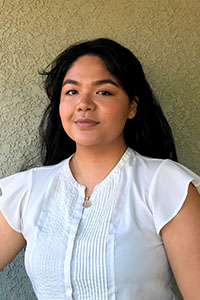 Dorilyn was born and raised in Southern California. She grew up in an immigrant household – her father from Guatemala and her mother from the Philippines. She moved around a lot before settling in Santa Ana. Her supportive environment encourages her to stay determined, inspired, and to take initiative. From her communities, she learned the importance of education and the value of connecting to individuals.

Dorilyn is currently a third-year at the University of California, Irvine double majoring in Political Science and Social Ecology. During her time as an undergraduate, she became involved with student affairs on-campus through various student government commissions and advocating for University of California Student Association’s Racial Justice Now campaign; off-campus she worked as a Higher Education Student Assistant at her alma mater through the Early Academic Outreach Program (EAOP). Dorilyn volunteers with the Chicano Latino Youth Leadership Project (CLYLP) and the Orange County Asian and Pacific Islander Community Alliance (OCAPICA).

Upon completing her bachelor’s, Dorilyn plans to pursue a joint J.D. and M.P.P. program. She is committed to education and supporting people that need their voices heard.

As a CHCI Intern, Dorilyn hopes to gain insight on effective and swaying organization tactics, evolve as a tenacious leader, and empower herself and members of marginalized groups to raise their voice.