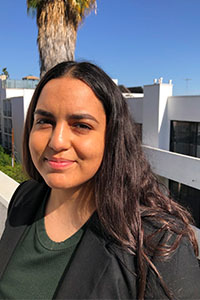 Janet Zamudio was born and raised in Los Angeles California specifically the South East Los Angeles region. She was raised by her first-generation immigrant parents and two older brothers. She comes from a space of hard work, strength, and dependability. Because of this, Janet strives towards achieving success in any given space by being dependable, a hard worker, and taking advantage of the opportunities she makes for herself.

She is currently a second-year undergraduate student at UCLA pursuing her bachelor’s degree in Geography and Public Affairs with a minor in History. She is a sports fan at heart with the Los Angeles Lakers, San Francisco 49ers, and Los Angeles Dodgers taking over her television when she is not busy, and she appreciates her time spent finding new locations in Los Angeles to visit. Janet’s main policy interests are environmental policy, immigration, labor, and housing. Growing up, Janet’s dream jobs were between a firefighter, chef, and veterinarian; but now, she plans to pursue a career that crosses into academia. She plans to achieve a successful career as an attorney and as a professor.

As a CHCI Intern, Janet hopes to further develop her administrative skills inside the legislative process, establish connections with peers and higher-ranking officials, and expand her understanding of U.S international relations and U.S standstill in housing policies. She aims to take her new and developed knowledge from this internship into her community and peers who strive towards positive change.