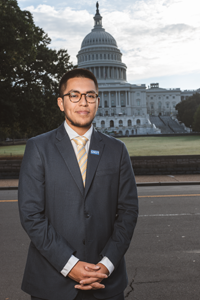 Julio Salas (He/Him/His) is a Colombian and Mexican first-generation college graduate, born and raised in Corona, Queens, NY. Being raised in a Latinx majority community that was under-served led Julio to feel pride because of his rich ethnic and geographical culture and sadness because of all the suffering in those same cultures and environments. Growing up, he internalized the suffering as stemming from flaws within himself. It wasn’t until his introduction to the social sciences that he realized the extent to which one’s environment shapes a person for better or worse. Understanding specific theories and how identity stemming stigmas shape policies that hurt marginalized people, Julio realized his feelings of inferiority once attributed to self-flaws were actually due to flawed macro-level structures. This realization, paired with an exorbitant amount of resilience, many mentors and programs who invested and believed in him, some luck, and a constructed self-belief that his potential was limitless, led Julio to graduate from Queensborough Community College and Cornell University.

In college, Julio interned at the American Heart Association, educating NYC Spanish-speaking people on ways to live a longer and healthier life. As a research assistant in the Affect and Cognition Lab, he worked on a project that studied how mindset-embedded neuroscience lesson plans influence academic achievement. Julio became an inaugural Kessler Presidential Scholar Mentor, where he mentored first-generation Cornell students. He also became a research assistant in the Fig lab, working on projects studying nutritional security and barriers/enablers to food assistance programs.

As a CHCI Public Policy Fellow, Julio hopes to learn everything he can about the Hill and how he can influence health policy. In the future, Julio aspires to go to medical school and live his life trying to make the world just a little better for underserved and marginalized folks.