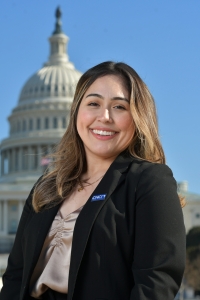 Kasandra Navarro (She/Her/Ella) was born and raised in South LA. She is the proud daughter of Mexican immigrants, the youngest of three children, and a first-generation college graduate. Her parents came to this country thirty years ago from Manzanillo, Colima, in search of better opportunities; however, even after becoming U.S. citizens, they quickly realized that assimilation would be an uphill battle. One of Kasandra’s earliest memories is being in elementary school, still grappling with the intricacies of the English language while simultaneously serving as a translator and advocate for her parents. Her families’ experiences inspired her to pursue a career committed to providing legal, health, and educational resources to historically under-resourced communities.

Kasandra attended Santa Monica Community College, often serving as a mentor to high school students, and later earned a B.A. in Political Science from UCLA. During that time, Kasandra worked as a program leader for After School All-Stars, a program that provides enrichment activities for youth in underserved communities, and volunteered at Bet Tzedek, a pro bono law firm specializing in providing legal services to low-income residents in Los Angeles. Kasandra also spent a quarter in Washington D.C. interning for Representative Karen Bass (CA-37), where she focused on child welfare and prison reform. After graduation, she interned for the U.S. Department of Agriculture with the Program Integrity and Monitoring Branch of the Special Supplemental Nutrition Program for Women, Infants, and Children (WIC). Through this role, she learned the importance of food sovereignty and developed a strong interest in preventative health measures, maternal health, and reproductive justice.

During her time as the CHCI-PepsiCo Nutritional Health Public Policy Fellow, Kasandra hopes to learn how to leverage her experiences to foster transformative change in government and politics.