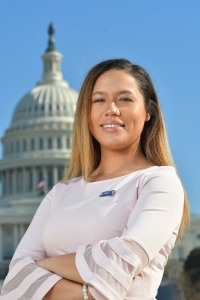 Patsy Montesinos (She/Hers) was born in Concord, North Carolina, to strong immigrant parents. From a young age, she witnessed firsthand the effect family separation has on immigrant communities. At the age of seven, her dad was deported, and three years later, she, along with her mother and sister, moved to Mexico. At age 15, Patsy returned to the U.S. to pursue a higher education. Despite facing many challenges while she was on her own, Patsy became the first person in her family to attend and graduate college. These experiences inspired her to push through every obstacle in hopes of making a difference for children like her.

Patsy attended Central Piedmont Community College, where she developed her leadership skills as the honors society president, the Rotaract club vice president, and member of the student government association. Patsy became Central Piedmont’s first-ever student commencement speaker and received multiple awards including, the North Carolina Academic Excellence Award. Patsy graduated with honors and distinction from the University of North Carolina at Chapel Hill with a B.A. in Media and Journalism and Latina/o Studies, where she completed an honors thesis about the implications of family separation. Patsy anchored her Spanish and English newscast, and focused on expanding coverage of the Latinx community. During her time at UNC, she traveled to Colombia to do a story about a Venezuelan immigrant family navigating poverty that won a national award from the Society of Professional Journalists. She later spearheaded an initiative during COVID-19 at Chatham News + Record to publish the first Spanish newspaper in Chatham County.

As a CHCI-Google Public Policy Fellow, Patsy is eager to continue researching the effects family separation has on children, focusing on mental health. She also hopes to learn how to effectively create and advocate for policy that helps historically oppressed communities in the U.S.