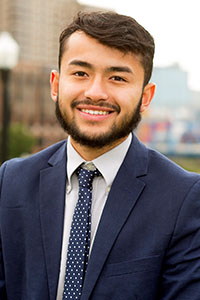 Rafael was born and raised in Grand Rapids, Michigan in an immigrant family. His mother, from Mexico, and his father, from Honduras, immigrated to the United States as young adults. He is the first in his family to attend college and understands that his success is a result of the efforts made by him and his family.

Rafael will be a senior this fall in the Honors College at Michigan State University, majoring in International Relations with a minor in Economics. After completing his undergraduate degree, Rafael plans on attending law school. Rafael is also an active student leader on campus holding positions as President for the James Madison College Latinx Unidos and Vice President for the Phi Chapter of Phi Iota Alpha Fraternity, Inc. He also serves as a mentor in the Affinity Mentoring Program, is a futsal player for Lansing City Men’s Pro Futsal, and always finds time to play soccer wherever he finds himself.

Rafael hopes to combine his passion for soccer with law and international relations to create a more equitable world. His career goal is to work for the Fédération Internationale de Football Association (FIFA), where he can use soccer as a tool to create opportunities and make soccer more accessible for the international community. Eventually, Rafael hopes to open his own law firm in West Michigan where he can offer affordable legal services.

As a CHCI Intern, Rafael looks forward to improving his knowledge of the legislative process, gain experience with international relations and diplomacy, and make connections with people working on Capitol Hill. He hopes to use this experience to bring change to his community and to inspire others to dream big.