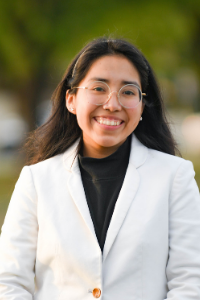 Uel was born and raised in San Antonio, Texas by both of her parents who immigrated to the United States from Mexico. She was raised partially in El Cerrote, Hidalgo, Mexico which is a small village up in the mountains surrounded by her family. Her family’s indigenous roots have helped her construe a special relationship with the environment and the idea of sustainability. As the youngest of six, Uel understands the importance of fighting for a spot at the table. Unfortunately, Uel’s father passed away in early 2021 due to COVID-19, but she is determined to move forward in order to keep her father’s legacy alive.

On-campus, Uel has organized a variety of protests and fundraisers to help bring awareness to issues such as the need for immigration reform, the climate crisis, and the importance of healthy lifestyles. Uel is currently a senior at the University of North Texas majoring in Political Science and History with a minor in Spanish. Upon graduation, Uel hopes to pursue a career in Urban Development and Planning. Her ultimate career goal would be to work for the U.S. Department of Housing and Urban Development (HUD) just like former San Antonio mayor Julian Castro did.

As a CHCI Intern, Uel hopes to gain experience working with public policy and developing new leadership characteristics. She hopes that with the knowledge gained from this experience she will be able to impact her community and push for better reform.