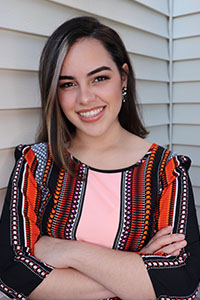 Vilmarie Ocasio was born and raised in Manatí, Puerto Rico. Since she was a little girl, she has been involved with her community. Consequently, she decided to work on her Girl Scouts Silver Award project, implementing a Recycling Program in her neighborhood. The young 21-year-old is a CEO & Founder of a Nonprofit Organization called: Community Organization of MS and Cancer, Inc. She has impacted over 200,000 people worldwide. She has created innovative ideas such as makeup tutorials for MS patients, orientating doctors about MS, organized HVP orientation camp, sent portable air conditioners to MS people, and many other initiatives.
Vilmarie is a senior at Coastal Carolina University pursuing a bachelor’s degree in Communications and a minor in Public Health.

She also worked as part of the leadership team to organize the Relay for Life event in her university and helped people with the aftermath of the hurricane on both South Carolina and Puerto Rico. Vilmarie pursued her Gold Award project titled: “Awareness of Multiple Sclerosis and Cancer.” There she promoted the approval of Law 85 July 22, 2016, to create the Registry of People diagnosed with MS in Puerto Rico. Her inspiration sparked when her mother was diagnosed with MS in 2014. Therefore, the love she has for her, motivated her to provide access to resources and information for families, professional health, and the general public.

As a CHCI Intern, I want to gain knowledge on performing legislation in congress and building relationships with people who can serve as mentors.