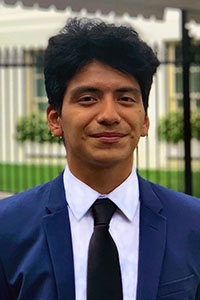 Abnner Olivares is a first-generation Mexican-American born and raised in the Los Angeles neighborhood of Boyle Heights. He is the proud son of an immigrant single father who taught him resilience above all else. Whether it was attending teacher-parent conferences, steam-filled garment factories in the Los Angeles Fashion District, or AA meetings, Abnner stood alongside his father and never lost sight of the prospects his education could bring to his family.

Abnner is a current undergraduate student at Yale University studying Global Affairs. He is a dedicated member of Sube: Yale Latinx Business and Leadership Student Association and is a proud Hermano of the Kappa Chapter of La Unidad Latina, Lambda Upsilon Lambda Fraternity, a multicultural Greek organization whose philosophy is to support Latino leaders nationwide. Upon graduation, Abnner plans to pursue a Master’s in Public Policy and continue advocating for a more equitable approach to government.

As a CHCI Intern, Abnner looks forward to realizing first-hand the legislature’s role in crafting policy. Ultimately, Abnner hopes to apply this experience towards his own goals of one day representing the most vulnerable in his community in the office.