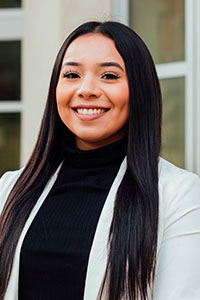 Ariana was raised in the small town of Jerome, Idaho by her Mexican immigrant parents who came to the United States to escape poverty and in search of a better life. Growing up, her parents have emphasized the importance of obtaining an education and serving her community. As a result, Ariana has been involved with the Associated Students University of Idaho. During her involvement, she advocated and represented underrepresented communities on campus and has given back to her community.

Ariana is currently a senior at the University of Idaho in Moscow, Idaho majoring in Political Science and Philosophy with minors in Spanish and Politics, Philosophy and Economics (PPE). Upon completing her undergraduate degree, Ariana plans to take some time off before attending law school at the University of Idaho College of Law. Her ultimate career goal is to become an attorney and represent POC and bring justice to those who have been wrongly convicted. She would also like to serve in public office to be able to represent the Latinx community and make a positive impact on the lives of millions.

As a CHCI Intern, Ariana hopes to gain a better understanding of the legislative process. She also hopes to obtain stronger professional and leadership skills to give her the confidence she needs in professional settings. From this experience, Ariana hopes to take the knowledge she acquires to make the difference her community needs.