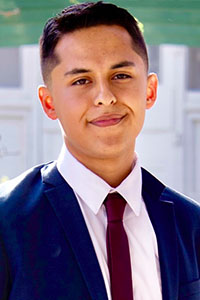 Freddy was born and raised in Phoenix, Arizona by his parents who immigrated from Sinaloa, Mexico. As a first-generation student, Freddy understands the importance of a college education and giving back to his community. As Vice President of Aliento at ASU, Freddy helped cultivate a safe space for individuals, who are DACAmented, undocumented, or from a mixed-status family, to share their personal experiences as a Latino/a living in Arizona. Freddy is currently a tutor for the Refugee Integration, Stability, and Education (RISE) program, a tour guide for Arizona State University, and a policy analyst for the Office of the President at Arizona State University.

Freddy is a Junior attending Barrett the Honors College at Arizona State University majoring in Communication and minoring in Public Policy and Justice Studies. After he completes his undergraduate degree, Freddy aspires to attain a Juris Doctorate and practice immigration or criminal defense law. His ultimate career goal would be to start his own non-profit organization that both advocates for policies at various state legislatures that improve the living standards of underserved communities as well as defend the rights of immigrants in a court of law.

As a CHCI Intern, Freddy hopes to strengthen his knowledge of the legislative process, as well as gain insight into the United States’ healthcare, housing, and education systems. Freddy hopes to apply the knowledge he gains as a CHCI intern to ultimately make a difference within his own community while inspiring others to do the same.