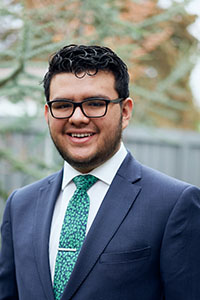 Henry immigrated to the United State from El Salvador at the age of 5 alongside his mother. He has resided in Salt Lake City, Utah with his parents and two younger sisters since arriving in the United States. Henry has loved the sciences, history, and politics since he started school. Government and policy have played an important role in Henry’s life not only as an immigrant but also because of the critical reliance STEM education have on policy and policymakers. He strives to be an advocate for STEM professionals and immigrants in his community.

Henry is a Junior pursuing an Honors Bachelor of Science degree in Chemical Engineering with a minor in Chemistry at the University of Utah. He is currently researching natural products created by understudied bacteria that have antimicrobial activity. Upon graduation, Henry plans to pursue a Ph.D. in biochemical or chemical engineering. He hopes to work in academia as a research professor. Henry has also been actively engaged in politics and the community throughout his undergraduate years. He completed an internship with a Congressional campaign and spent two years as a resident in an on-campus house focused on community service.

As a CHCI participant, Henry hopes to learn more about the legislative process and how he can apply his quantitative and problem-solving skills in the context of policymaking. Henry has always strived to maintain a balance between his interest in the STEM fields and community engagement.