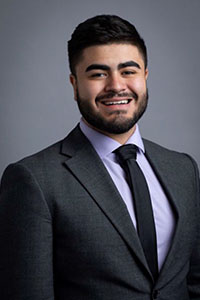 Miguel was born in El Paso, Texas but grew up in Ciudad Juárez, México with his mother, father, and little sister for the first 10 years of his life. The violence which erupted from drug wars in Mexico forced Miguel’s family to seek refuge in El Paso, where they had to start a new life. As a first-generation and low-income student in the United States, Miguel found value and opportunity in education. Last year, he co-founded a non-profit organization named the El Paso Leadership Network, which has established a mentorship program between dozens of high school and university students from El Paso.

Miguel is currently a senior at Columbia University concentrating in philosophy. Upon completing his undergraduate degree, Miguel will join the Teach for America Corps where he will teach in a low-income community for two years. He plans to obtain a master’s degree in education policy after his teaching commitment.

As a CHCI Intern, Miguel hopes to learn how public policy can positively impact the progress of disadvantaged people. He hopes to use this experience to make a difference in the communities he is a part of and inspire others to do the same.