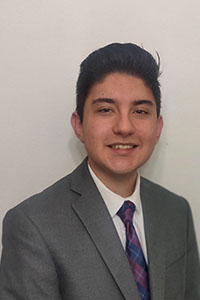 Nicolas was born in Bogota, Colombia, and immigrated to the United States when he was 5 years old. He was then raised in the small and diverse city of Hacienda Heights, California. Since a very young age, his parents instilled in him the value of an education and the opportunities that it unshrouds. As a Deferred Action for Childhood Arrivals (DACA) recipient, he is passionate about the power of public policy and hopes to play a role in expanding legislation to create a more inclusive nation.

Nicolas is currently a second-year student at the California State Polytechnic University, Pomona, studying Political Science and Communications with an emphasis on multimedia journalism. On-campus, he has been active in undergraduate research concerning mass media framing of underrepresented political candidates as well as the undocumented student experience. Upon graduating, he plans to continue his higher education by obtaining a doctorate degree and conducting American political research, focusing especially on elections and the U.S. Congress.

As a CHCI participant, Nicolas hopes to gain a rich, in-person understanding of how the unique American congressional process operates and hopes to explore career opportunities in Washington, D.C.