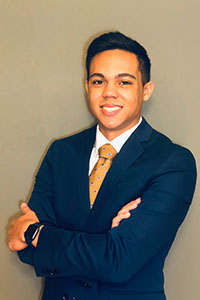 Richard is a rising senior at Case Western Reserve University (CWRU) majoring in Political Science, History, and Spanish. Upon completing his undergraduate degrees, Richard hopes to obtain a J.D. and LL.M. in international law. His ultimate career goal is to start his own firm and advocate for equal access to legal representation in underrepresented communities of color.

Richard was born in Elyria, Ohio, and raised by his father and mother who immigrated to the United States from Nicaragua at the age of 8. As the son of an immigrant, Richard values the importance of a strong work ethic. On-campus, he works both as a Resident Assistant and a Customer Service Assistant. Richard currently serves on the executive board for La Alianza, a Latinx student organization at CWRU, where he works with local organizations in providing opportunities for all Latinos in Northeast Ohio. As an intern with LNE Group in Cleveland Ohio, Richard has experience in transatlantic government advocacy and strategic advisory. Richard has always pushed himself to balance his work and academics, give back to his community, and help his peers.

As a CHCI participant, Richard hopes to strengthen his leadership and professional skills while gaining first-hand experience in the legislative process. Given his current studies at CWRU, Richard hopes to attain a deeper knowledge of U.S. international relations, as well as gain insight into U.S. immigration policy. Richard hopes to utilize his experience with CHCI and make a difference in giving back to his community.