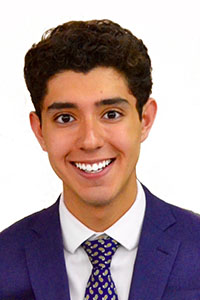 Although he was born in Miami, Florida, Diego was raised in San Antonio, Texas, after his family immigrated to the United States from México. Throughout his life, Diego has always been driven by a passion to help others in his communities, through everything from legal advocacy to movement-building. Most recently, Diego has worked to support asylum seekers and migrant workers through internships at legal services across the country; furthermore, he has also endeavored to empower his Latinx communities on campus and in his current hometown as president of the Organization of Latin American Students (OLAS) at UChicago and as a fellow at the Florida Immigrant Coalition (FLIC).

At the University of Chicago, Diego is a third-year double majoring in Law, Letters, & Society and Sociology; additionally, he is also pursuing a minor in Human Rights. After graduating from the University, Diego aims to attend law school so that he can eventually use the legal system to fight for vulnerable people across the United States and beyond its border. Ultimately, Diego hopes to become a civil rights attorney who specializes in immigration and criminal justice.

As a CHCI Intern, Diego hopes to become familiar with the legislative process so that he can use policymaking as another tool to support and empower people. Finally, he also hopes to help impact positive change in peoples’ lives through his work on Capitol Hill.