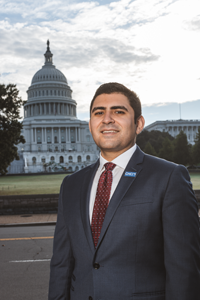 Jose Macias (He/Him) is a first generation, transfer & Chicano graduate raised at the periphery of rural California in the small border town of Calexico. Living on the border, he navigated social inequities and fostered his cultural identity by spending time with his family on both sides of the border wall. His lived experience on the border shaped his morals, values and taught him to remain humble in his successes and reinvest in his community to build resiliency. He later moved to Orange County, C.A., graduated high school and decided to attend his local community college to save on tuition and stay close to his family. After three years and with the support of his professors, Jose transferred to the University of California, Davis as a first generation student.

At UC Davis, Jose discovered an insatiable appetite for international relations and great power competition. His core study focused on national security by taking courses centered on drivers of political grievances that lie at the heart of interstate, intrastate, and ethnic conflicts. Jose built on his curriculum by interning for the U.S. Mexico Embassy and studying abroad at Universidad Nacional Autónoma de Mexico (UNAM) in Mexico City to specialize in emerging threats in Latin America. Then, he returned to serve as a public policy intern for the California Governor’s Office of Planning & Research (OPR) and California Strategic Growth Council (SGC). Under OPR and SGC, he worked on projects designed to remedy political grievances through inclusive grants and programs. After graduating, he advanced our national security interests through cyber conflict research by interning for the U.S. Department of Defense and Army Cyber Command to cultivate conceptual models of cyberspace using open-source, dyadic datasets and academic journals.

As the CHCI-Chevron Public Policy Fellow, Jose aspires to bridge the gap between academia and policymakers to develop initiatives that improve U.S. digital infrastructure, incorporate layered deterrence, and be a resource for our nation in a time of strategic competition.